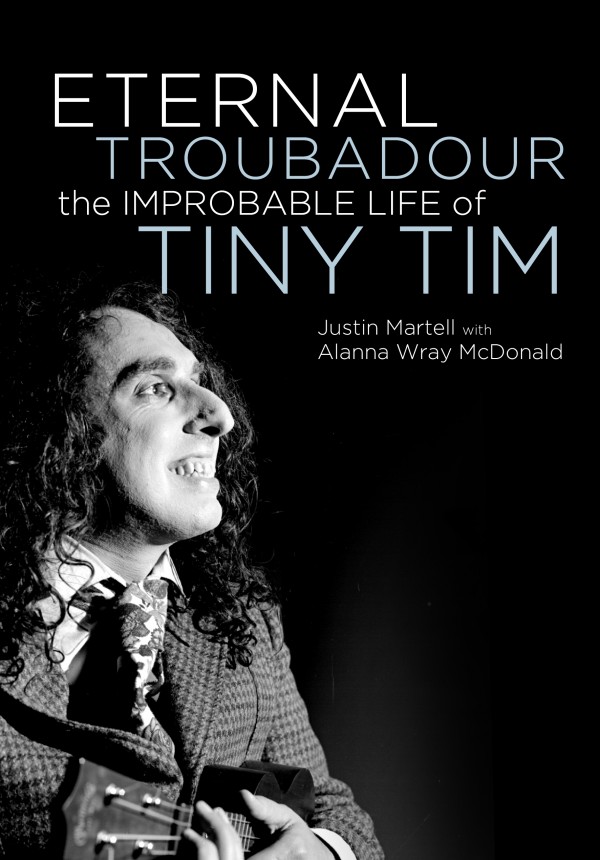 Due to a production issue, the first printing of Eternal Troubadour contains a number of small text errors, which will be corrected in future printings. If you have bought the print edition and would like a complimentary copy of the updated ebook version, please contact tinybook@jawbonepress.com. Please include proof of purchase and specify whether you would prefer to receive the book in Apple iBook or Amazon Kindle format.

‘Tiny Tim was truly one of a kind.’ Paul Williams

‘He was a dedicated artist.’ Garth Hudson, The Band

‘[Tiny] was … a Dadaistic statement … that reshaped what a singer could be.’ Peter Yarrow, Peter, Paul & Mary

‘A totally modern artist and a pioneer of … post-modernism.’ Martin Sharp, artist

‘He was phenomenal.’ Howard Stern

As Bing Crosby once put it, the rise of Tiny Tim represents ‘one of the most phenomenal success stories in show business.’ In 1968, after years of playing dive bars and lesbian cabarets on the Greenwich Village scene, rubbing shoulders with the likes of Bob Dylan and Lenny Bruce, the falsetto-voiced, ukulele-playing Tiny Tim landed a recording contract with Frank Sinatra’s Reprise label and an appearance on NBC’s Laugh-In. The resulting album, God Bless Tiny Tim, and its single, ‘Tip-Toe Thru’ The Tulips With Me,’ catapulted him to the highest levels of fame.

Soon, Tiny was playing to huge audiences in the USA and Europe, while his marriage to the seventeen-year-old ‘Miss’ Vicki was broadcast on The Tonight Show in front of an audience of fifty million. Before long, however, his star began to fade. Miss Vicki left him, his earnings evaporated, and the mainstream turned its back on him. He would spend the rest of his life trying to revive his career, with many of his attempts taking a turn toward the absurd.

While he is often characterized as an oddball curio, Tiny Tim was a master interpreter of early American popular song, and his story is one of Shakespearean tragedy framed around a bizarre yet loveable public persona. Drawing on more than a hundred interviews with family, friends, and associates, plus access to Tiny’s diaries, which have never before been made public, ETERNAL TROUBADOUR tells the incredible true story of one of the most fascinating yet misunderstood figures in the history of popular music.

With a foreword by Harry Stein.