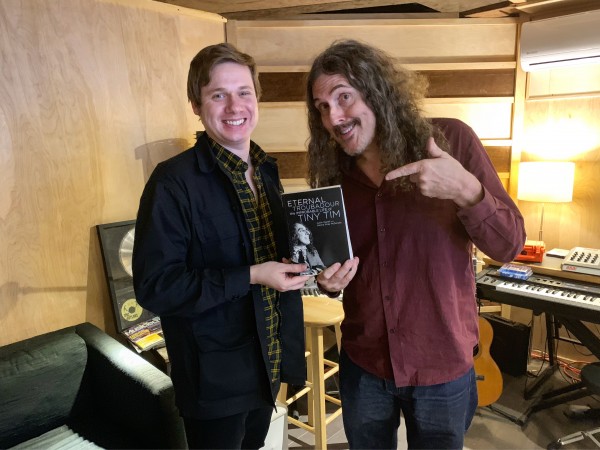 “It has been twenty years since my late husband Tiny Tim passed away, and I continue to be grateful for the continued support by his fans and friends. I thank you all for your kindness. I am also amazed and gratified by all the new fans, friends, and projects such as the wonderful biography by Justin Martell.”

– Miss Sue, Tiny Tim’s widow, provides a special tribute on the 20th anniversary of her husband’s passing, alongside an excerpt from Eternal Troubadour, medium.com/cuepoint

“Early on in Justin Martell’s fascinating bio, Eternal Troubadour: The Improbable Life of Tiny Tim, the man who booked Tiny on Carson prepared a briefing that said, in part, ‘HE IS FOR REAL. BUT WHAT HE REALLY IS, IS THE REAL QUESTION.’ …” 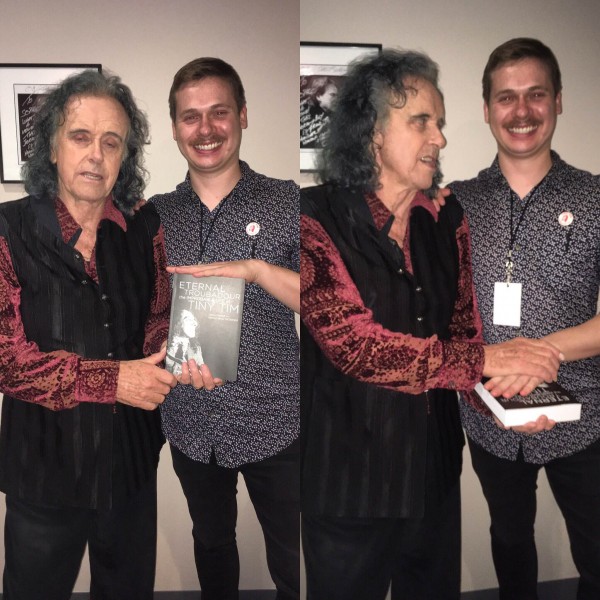 “I love this book. It’s exactly the right feel. Tiny Tim had an almost magical power to destroy cynicism in every one he encountered from Bing Crosby to Howard Stern, from Lenny Bruce to John Lennon, from Sinatra and Carson to all the rest of us. This hardcore atheist says without irony, ‘God Bless Tiny Tim.'”

“The authors are to be commended for handling the complexities of this complicated yet beautiful spirit … they’ve produced one of the most honest and revealing biographies of the year, one that tells its story well, warts and all.”

“You don’t need to be a superfan to get something out of Eternal Troubadour: it’s an intriguing study of a figure from the fringes of pop culture, who as it turns out led the kind of strange and sometimes wild life you associate with rock stars.”

“Tiny Tim, as made clear in Eternal Troubadour, was a very complex person and artist. Perhaps this book will be the springboard for a new evaluation of his work.”

“Eternal Troubadour is an insightful, engrossing exaltation of an awkwardly charismatic performer who was indeed profoundly blessed.”

One of the most misunderstood figures in pop music, Tiny Tim was a hell of a lot more than the “freak” that warbled “Tip-Toe Thru’ the Tulips With Me.” A true American treasure, Mr. Tim finally gets his just due in this unforgettable book. Authors Martell and McDonald dig under every grimy show-biz rock to uncover Tiny’s surreal, bittersweet story, and they tiptoe around none of it. The research is sublime; the empathy undeniable.  I howled with laughter reading The Eternal Troubadour and was choked with emotion by the last page. The definitive work on the subject and an absolute classic music biography.

“[This] voluminous and serious book reconfigures [Tiny Tim] as an outsider artist: more Daniel Johnston and Pudsey The Dog … Tiny Tim was a freak on his own terms.”

“It’s the best book about Tiny Tim IMO, with far more info than the others, and what seems to me like a balanced attitude toward this complex and remarkable man, who was such a magnet for controversy. His story is all there, the depressing parts and the thrilling parts. I’ll be referring to this a lot, and cursing the publishers every time for not including a %$&?% index!”

“The story of Tiny Tim’s life is alternately heartbreaking, infuriating, and head-scratching. And with scores of new interviews (including wives Miss Vicki and Miss Sue…), detailed research, and access to Tim’s own personal (and very frank) diaries, this book makes for a compelling, if lengthy read for the non ‘Tiny Head.'” 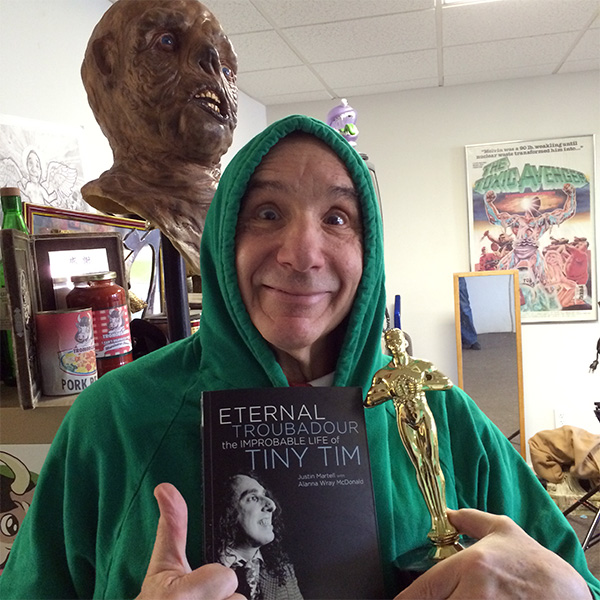 “Not tiny but humungous! A Tiny Tome!”

“When I was 7 years old, I caught Tiny Tim at a Halloween theme Park called Spooky World, and later on in high school I was introduced to his music, and then my parents became horrified when I became obsessed. 15 years later, here we are.”

Justin Martell on the Between the Liner Notes podcast, discussing Eternal Troubadour, God Bless Tiny Tim, and the forthcoming album Tiny Tim’s America: Rare Moments, Volume 2, due for release in May 2016 from the @Ship to Shore PhonoCo. The interview also includes some extremely rare audio clips of some of Tiny’s classic appearances on The Tonight Show.

“… Using Tim’s fastidiously kept diaries as the primary source of reference, no aspect of his life is left untouched here whether it be the quaint obsession with songs from decades gone by, the cosmetics, the obsessive hygiene rituals and the comically out of step with the times views on everything from sex, morality and religion to The Vietnam War. Much of the time this meticulously researched biography reads like a creation dredged from the furthest reaches of the imagination of Tim Burton or Werner Herzog but for all the unlikelihood of its contents this is a true story about one of the counter culture’s most idiosyncratic and enduring cult figures.
A must read for the committed fan and the curious reader alike, here’s proof if it were needed that truth really can be stranger than the wildest fiction. Take a bow, TT.”

“Gawky, unattractive and singularly odd, Tiny Tim was the unlikeliest of showbiz successes. Indeed, his time in the sun was extremely brief, spanning just a few years in the late 1960s and early ’70s. And yet he endured, often penniless, patching together a career that limped along for another quarter century. As CBS aptly observed at the time of his death in 1996, he found “fifteen minutes of fame that lasted a lifetime.” Now, two decades on, Justin Martell, surely the world’s foremost expert on all things Tiny Tim, shapes a reassessment so thorough that is stretches to more than 500 pages …”

“Was he a comic genius who could play the ukulele, or a vulnerable entertainer promoted and then ditched by the most ruthless management in a very cruel business? It is unlikely that anyone will truly know, but Martell has had a damn good try to decipher him. He presents an excellent and riveting study that is a compelling and enjoyable read about one of pop music’s oddest characters. … Buy it!”

“Tiny Tim was a huge figure in the late sixties and early seventies, yet often forgotten. Information on him is scarce at best, and yet his life, his art, and his actions are endlessly fascinating. Thus, Eternal Troubadour makes for an interesting and essential read.”